Pluto, the Nodes – and a Black Hole revealed…

‘…the combination of Nodal activity with the foreground presence of outer planets, especially Pluto, points out that something really special is going on…’ (i)

Today, the 10th of April, 2019, that something really special was a giant leap forward in our understanding of our magnificent cosmos: the first ever image of a black hole, from the galaxy Messier 87.

From the New York Times today:

‘…At the center of our galaxy lies Sagittarius A*, a black hole as massive as four million suns: The black hole is obscured by thick dust and a bright haze of superheated gases. A network of eight telescopes called the Event Horizon Telescope tried to use radio waves to peer through the dust cloud and glimpse the edge of the black hole. After years of analyzing data, the team did not release an image of Sagittarius A* on Wednesday. But it did catch a glimpse of something else: An even larger black hole, nearly 7 billion times the mass of the sun, sits at the heart of the nearby galaxy Messier 87…’

From an astrologer’s perspective:

The astrology of this event is stunning, as you see from the horoscope here, set  for the time the updated image was released to the public from Washington DC this morning. 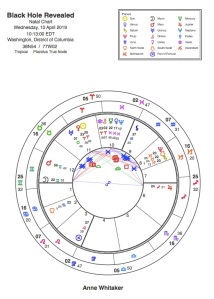 There is much to be commented on in this remarkable chart, but I will confine myself for now to the major factors which leapt out on first sight.

First off, we see the Moon’s South Node straddled by Pluto on one side, Saturn on the other in the eighth house of  life’s deepest and darkest mysteries. The Nodal axis forms a dynamic T-Square from the eleventh house of the human collective, with the pioneering Aries Sun conjunct Eris, the battle goddess, and widely conjunct Uranus. To me this speaks of the vast destructive power of the energies involved, expressed vividly thus:

“…The images released today bolster the notion of violence perpetrated over cosmic scales,” said Sera Markoff, an astrophysicist at the University of Amsterdam, and a member of the Event Horizon team. “Black holes must be the most exotic major disrupters of cosmic order,” she said.(ii)

Next up, just look at that Moon rising in the twelfth house at 22.5 degrees of Gemini, opposite Jupiter in Sagittarius, straddling the Ascendant/Descendant axis at 25.5 degrees Gemini/Sagittarius. Not only  does this pattern lie in the pair of signs connected to our endless quest for knowledge, but is closely plugged in to the planet Uranus’ discovery degree, ie  24 degrees 27 minutes Gemini, (which I wrote about in a recent post)

I associate Pisces here on the MC, and its co-rulers Jupiter and Neptune, with our ancient human yearning to connect with those only dimly understood great forces of the universe which have held us in awe and stimulated our need to explore the farthest regions of both inner and outer space since the very beginning of human culture all those millennia ago.

Through the best efforts of human co-operation and pooling of knowledge shown by the tenth house placement of the Mercury/Venus/Neptune line-up, and the eleventh house placement of the Sun, we have arrived at – so far – the deepest place of understanding of the immensity of forces at work in our cosmos. This arrival is summed up in today’s vivid visual image, a picture worth more than a thousand words:

our first ever actual picture of one of the cosmos’ most powerful, destructive and mysterious objects: a Black Hole.

8 responses to “Pluto, the Nodes – and a Black Hole revealed…”