How I became an astrologer

It has been most interesting following  social media reactions to this recent article in Harper’s Bazaar, in which four women talk about why they chose to become astrologers. So – I thought I’d share my story of how a dismissive sceptic – me! – turned into a devoted practitioner. Enjoy! And remember – never say never… 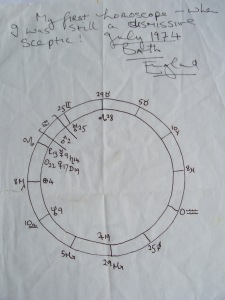 My career as an astrologer began in a launderette in Bath, England, in the 1970s – although I didn’t realise that at the time ! Befriending a little girl who came to chat whilst I did my washing, I met her parents, Gloria and Seamus; they were astrologers, they said, and would I care to come back to their place for a cup of tea? They’d like to draw up my horoscope, to thank me for entertaining their child.

Well, I remember thinking, nothing better to do for the next hour…….at that  stage I was  scornful and dismissive of astrology, basing my judgement on the Sun Sign material in the media which struck me as general, banal and trivial. I did not know then that  there was a subject of great depth and power beyond  the Sun Signs.

I was puzzled  by my new  friends’ dismissal of  the Sun Sign columns – wasn’t that what astrology was all about ?. “We’re proper  astrologers” they said firmly.“ Your Star Sign (Leo, in my case) only puts one  character on the stage of your life. It’s impossible to describe who you are from only one factor.”

They wrote down my date, place, and apparently vital TIME  of birth, produced various reference books and did complex-looking calculations. Then they drew up my Birth Chart or Horoscope : this was a map of the heavens for the precise time I was born. It was apparently an unusual chart  – lots of planets in the twelfth house, whatever that meant, and strong Pluto, Saturn  and Uranus influences. So what, I thought.

Then came their interpretation into character analysis of the planetary symbols in my Birth Chart, in considerable depth and with a high level of accuracy. The experience shocked me to the core.

How could they be so accurate about my career aspirations? How could they know what my deepest fears were ?How COULD they manage to describe my parents’ core characteristics and some of the key effects they’d had on me ? How could they describe so vividly the restless spirit  which drove me ? I had met them less than an hour ago. They knew nothing of my personal history or life experience.

Worse was to come. “You tell me you’re a total sceptic,” Seamus chuckled . “But your Horoscope shows that you have a deeply sensitive, spiritual side to your nature which you’re currently refusing to acknowledge, preferring to identify with the intellectual and the rationalist in yourself. But I can see from your Chart, and where the planets will be in a few years, that in your early thirties the spiritual dimension will come calling. You are very likely to end up doing something like this yourself.”

What nonsense, I thought. But I had no acceptable way of explaining in rational terms what had happened. Uneasily, I filed the experience away in the pigeonhole reserved for the many incidents occurring in my twenties which did not fit my existentialist  world view.

Fast forward to my early thirties, having forgotten all about Seamus’ prediction. For my birthday that year, a friend gave me an odd present considering my scepticism – an astrology book. It was intelligently and sensitively written; I found myself compelled. My feelings were an uncomfortable mixture of attraction, rejection, fascination and embarrassment. What COULD I say to my friends and family?

Saying nothing, I carried on reading. After a year, astrology still fascinated me. By this time – and by a series of odd coincidences – I had found out about the Faculty of Astrological Studies, based in London. It offered a year-long correspondence course with some lengthy exams at the end of it, leading to a Certificate of the Faculty.

I embarked on my studies in an empirical spirit. If astrology WAS indeed merely superstitious nonsense of little value, at least I would have arrived at a conclusion based on knowledge and practice, rather than ignorance and prejudice. I had moved on sufficiently from intellectual arrogance to the awareness that it was very unscientific, and highly irrational, to dismiss a whole body of knowledge without ever having studied it. I obtained my Certificate in 1983, by which time my studies had demonstrated to me that the astrological model had worthwhile insights to offer.

The teaching and practice of astrology became a major strand in my self-employed career from 1985 until 2001 when, following a long health crisis, I gave up all work (except writing!) for seven years. In May 2012, after a very long sabbatical, I returned to my astrological work part time, and teaching in 2014. It feels good to be back!

My first astrologer – self portrait

12 responses to “How I became an astrologer”