The Leo lunar eclipse: anyone else feeling restless?

I have been feeling restless, bored (despite having ongoing creative projects on the go) and very much in need of a new angle on ‘What do I do with the rest of my life?’ ever since the Aquarian New Moon at the end of January 2017, dropping in on my 6th House, heralded the new Leo/Aquarius eclipse season, starting right now – just after midnight ( GMT) on 11 February 2017 with a lunar eclipse at 22.28 Leo – running right through to the last in the season, another lunar eclipse at 0.52 Leo on 21.01.2019. 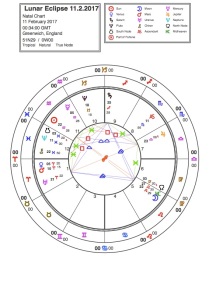 The Nodal axis travels backwards through the zodiac at 18 months per sign, pulling twice yearly solar and lunar eclipses with it as it goes. The final eclipse of the Virgo/Pisces season is due on 26th February 2017 at 8.12 Pisces. That season began on 20.3.2015 with a solar eclipse at 29.27 Pisces.

What does it all MEAN, though? A quick trawl through google will reveal dozens and dozens of astrology sites offering all kinds of opinion. It seems that we humans still get excited by eclipses, which have been dredging up fear, excitement, anticipation and predictions since the earliest days of civilisation if not earlier.

I can still clearly recall the fuss, during the last Leo/Aquarius eclipse season, over the Big Solar Eclipse of August 1999, which picked up on a great deal of collective fear as the Millennium approached. Predictions, from the end of the world as we knew it to Paris going up in flames, ran rampant. As you may have noticed, the world is still here, and we still have Paris. If you’d like to read what I wrote about it all then, just click HERE.

How, then, do we make sense of eclipses and relate them to our own lives in ways which are going to be useful? There are choices to be made regarding this question. My own view, for what it’s worth, is that getting worked up about individual eclipses is all very well, but we need to put some kind of context in place for the information we extract to be of much value.

The biggest possible context is that of placing this and subsequent Leo/Aquarius eclipses over the next couple of years, in the context of the Saros Series of eclipses, which run in vast energy waves from North to South across the globe, repeating every 19 years, for varying periods of up to a thousand years or more. Each eclipse belongs to one of the Saros Series families of eclipses, each of which has a specific core meaning rooted in the very first eclipse of that particular series. If you want some in-depth research by Dr Bernadette Brady, the book to acquire is “Predictive Astrology: The Eagle and the Lark . A free 17 page download introducing the Saros Series is also available from her website HERE.

If you don’t quite have the time, energy or inclination to pursue this truly fascinating context, then the next one to consider in which to set this eclipse and the upcoming Leo/Aquarius season, is the 18.6 year returning cycle of the Moon’s Nodes, which governs the appearance of both solar and lunar eclipses.

(For readers who need to be brought up to speed regarding Nodal   basics, check out Wikipedia on The Lunar Nodes for the astronomy, and Cafe Astrology for a typical explanation of the Nodes’ symbolic meanings.)

As the Nodal axis regresses through the chart, identifying via the highlighted houses the overall territory up for change, the transiting eclipses function as “battery chargers”, gradually building up the energies of our lives in preparation to receive major change.

An image  comes to mind here from the female menstrual cycle, of the egg gradually being primed and prepared until it is at its maximum point of readiness to receive the male sperm, conceive and begin new life. I think the eclipses begin their work of charging-up as soon as the relevant eclipse season begins, which may be as long as eighteen months before the turning point(s) in  life appear.

The really powerful “major” times in life are characterised by not just one or two, but a cluster of transits and/or progressions involving the natal, and/or progressed, and/or transiting Nodes.The outer planets, especially Pluto with its strong “fated” feel,  stand out. To read the research on which I based those conclusions, you can purchase my book The Moon’s Nodes in Action HERE.

As the Moon’s North Node retrograded through Virgo, pulling the eclipses with it,and connecting with the Saturn/Neptune square which transited 10-15 degrees of  Sagittarius/Pisces from November 2015 to its last exact square in September 2016, those powerful, difficult energies triggered the natal Uranus conjunct Pluto in Virgo opposite Chiron in Pisces natal configurations of people born from 1963/4 right through to 1968.

Many people had a particularly difficult time during 2016 as a consequence of being ‘plugged-in’ to this energy pattern combining natal planets, Nodes, eclipses and Pluto and producing events of a life-changing nature in many cases. I saw this in a number of clients’ charts and lives, in members of my own family – and their challenges directly impacted on me, since I have 9 Virgo/Pisces as my Ascendant/Descendant degrees.

The dominant transiting pattern for 2016 was Saturn in Sagittarius, squaring Neptune in Pisces. Everyone with planets/Asc/MC/ Nodes/Chiron in the early to middle degrees of the mutable signs triggered by this Saturn/Neptune square would have found 2016 tougher than usual, with family of origin pain, loss, low energy, confusion re life direction, and often, health issues in the mix.

I’d be really interested to have feedback from any readers whose horoscopes fit this natal and transiting pattern, and whose lives were impacted accordingly. It’s been a tough year or so! However, it is to be hoped that the solar eclipse on  26th February 2017 at 8.12 Pisces will one way or another, draw a line under the particular themes of spring 2015-2017.

What lies ahead for the Leo/Aquarius eclipse season?

Overall, the birth chart for the starting eclipse of this season looks altogether more buoyant than the preceding Virgo/Pisces one. For starters, Nodal/eclipse energies are moving from earth and water to fire and air, lightening things up and bringing in greater potential for moving forward as a result of creative opportunities coming our way through group contacts, if we are ‘plugged-in’ to the Leo/Aquarius axis via planets in our birth charts.

For example, I’ve just had dinner with my 23 year old nephew, who has Leo rising and Jupiter conjunct his Libran IC. He is full of all kinds of  plans for his studies, and for placement and internship applications to further his future career in overseas development. He does not know at all at present which way any of several dice are going to fall.

The eclipse falls exactly on my Sun at 22 Leo, so his excitement and enthusiasm has helped to get my creative fire going. Why else would I be mad enough to be sitting writing a blog post at 10.30 on a Friday night?!

As can be seen from the above chart, there is a Grand Kite pattern draped around a Jupiter/Uranus opposition.  As the Nodes and eclipses regress through Leo/Aquarius, they will be picking up that opposition, and Uranus’ trine to Saturn, sextile Jupiter, for much of 2017.

So – a combination of restless desire to break new ground via the Jupiter/Uranus opposition, held in check by Saturn and offered fruition by the Jupiter/Saturn sextile, is the prevailing Nodal/eclipse pattern for 2017. Since the North Node always pushes us to be the best we can be, and this North Node is in Leo, have a good look at the pair of houses which will be highlighted in your horoscope by the North and South Nodes and their attendant solar and lunar eclipses. These are now about to be the areas up for major change in the year ahead.

Good luck with it all! And feel free to leave feedback. That’s how we go on learning…

How significant is astrological Pluto in the horoscopes of atomic scientists?

I’ve just read this brilliant article about the significance of Pluto. Do read it!

“…Pluto was discovered in 1930 and astrologers soon began to notice its prominent placement in the birth map (horoscope) of scientist Wilhelm Roentgen, the discoverer of X-rays. The planet also showed up prominently in the horoscopes of other atomic scientists and the event charts for the first sustained nuclear reactor start-up in Chicago, the first atomic bomb tests, the bomb’s subsequent use in World War II and in reactor accidents since then.

For example, when a lunar eclipse occurred very close to Pluto in April 1986, Crawford wrote: “If you don’t feel this one, you’re probably not alive.” That was truly prophetic as the Chernobyl meltdown four days later raised background radiation levels world-wide…”

To read the rest of this article, click below:

Posted in An Astrological Miscellany: of cusps, virgins, atomic scientists, Muhammad Ali and much, much more...(13 articles)

This isn’t directly related to the Saturn Return, but your post raised another question for me. If the earth’s moon is treated for symbolic purposes as a planet, what about the moons of other planets, like Saturn? After all, Saturn has 62 moons (although not all are named and some are quite small). Still – that’s a lot of stuff whirling around out there!

The essential point to make is that astrological symbolism first arose and was consolidated at a stage way back in history when humans could only inform themselves of what was going on in the heavens via the naked eye.

By an astronomical quirk, the Moon is 400 times smaller than the Sun, but 400 times nearer the Earth, so we see them as the same size. Thus they were given equal significance in symbolic terms by our ancient ancestors.

The sheer majestic visual power of the regular cycles of solar and lunar eclipses, when Sun, Moon and Earth are precisely aligned in the heavens, amplified and added awe and significance – affirming the symbolic power of the Earth’s Moon in the eyes of the ancient peoples of the world.

This sense of significance continues to this day. Do you recall the enormous fuss that was made of the 11 August 1999 eclipse, as we all awaited the Millennium with the dreaded Millennium Bug hanging over us?  Here is just one of the predictive articles which appeared at the time: http://astrologer.ru/article/cassini.html.en.

Needless to say, Paris did not go up in flames, and we are all still here, as far as we know!

Huge advances in space exploration and observation in recent years have certainly brought a vast amount of planetary gravel of varying sizes and significance to our attention – including the 62 moons of Saturn –  as well as many exo-planets unknown until fairly recently. Many astrologers now include, for example, a variety of asteroids and other bodies in their astrological research and horoscope interpretation.

Maybe I’m just lazy – but I tend to think that basic astrological symbolism is complex enough to produce very accurate, useful interpretations for my clients and students and that the more complexity one introduces, the less clarity one achieves.

But I am open to conversion, as always…..well, depends on what it is!

AND – New visitors and Followers out there! Do drop by with your observations….. and, of course,  your Questions….on any astrological topic.

Posted on June 2, 2013 | 2 comments
Hi Anne, what impact do you think the eclipses that have taken place recently have on an individual and global basis? Thanks, Frances.

Hi Frances, since I am aware that many of our prospective readers may know very little (yet! keep following and you soon will!) about astrology, this reply contains a few links through which those readers can gain an introduction to what the the Nodal Axis is, and what its attendant twice-yearly season of eclipses means.

For readers who need to be brought up to speed regarding those basics, check out Wikipedia on The Lunar Nodes for the astronomy,and Cafe Astrology for a typical explanation of the Nodes’ symbolic meanings.