I use a very graphic, grounded, simple image to help my students get to grips with the inter-relationship between the longer-lasting planetary transits of Saturn, planetoid Chiron, Uranus, Neptune and Pluto and the faster-moving Moon, Sun, Mercury, Venus and Mars. I ask them to imagine cooking a pot of soup.

The Moon, Sun and inner planets meeting the slower-moving outers is like turning the heat up under the slow, steady bubble of the soup for a short spell. The effects of this bubbling-up are usually powerful, symbolically pushing us towards the potential for greater awareness, and hopefully positive change. But the circumstances are usually pretty uncomfortable, at times highly disruptive. Painful too.

The last week of November 2016 saw Mercury in Sagittarius briefly charging-up Saturn, in long-term square to Neptune in Pisces for most of the next year. The first week of December saw the Sun shine a fierce light on the same territory. Those of us with planets/Nodes/Angles in the first ten or so degrees of the mutable signs are likely to have had an uncomfortable fortnight.

Here’s a taste of what my particular soup is like at present, so to speak…

I’ve recently had nearly a year of Saturn transiting my South Node/IC, widely squared by Neptune. Currently, Saturn is transiting my Fourth House, T-Squaring the Ascendant/Descendant axis which has Neptune currently crossing that axis, squaring Saturn. A potent and uncomfortable planetary brew!

Yesterday, with the New Moon just taking shape in optimistic, philosophical  Sagittarius, was a really good, nourishing day. Perspective has been emerging on what has been a very difficult fortnight, including a whole week of a very unpleasant cold which has pushed me into rest and seclusion. I have often found – perhaps not unconnected to having several Twelfth House planets – that big psychological shifts are accompanied by the necessary retreat period that a short bout of illness brings…

In essence, I have been wrestling with what matters to me at the very core, and those encumbrances I really need now to leave behind. All very connected to Saturn over the IC, moving into the Fourth House, and the square to Neptune’s prompting to allow certain ties to dissolve, and certain old disappointments and hurts to slip into the stream of  Time..I now have at last gained some very much needed detachment from pathological aspects of familial bonds and feel freer just to let people go, for good or ill.

Life, of course, in its usual fashion presented me with a tough test of this hard-won perspective. The day that the Sun was conjunct Saturn, turning up the heat on the Saturn/Neptune soup so to speak, a much loved young relative set off on a three-month solo trip to India…to date, he has sent me six pictures of  splendid colonial churches, sinking into decay…so I know he is ok thus far!

One of the great gifts of Neptune, which is a hard gift to appreciate, is that it dissolves those Saturnian structures which not only keep our lives on track, but also can keep us stuck in patterns which are undermining and/or blocking our development. I was reflecting on this when I dipped into an interesting-looking new online astrology magazine, Real Imaginal, created by Erica Jones.

She mentioned  Healing Fiction,  a book by archetypal psychologist James Hillman, in which he claims that “… a fluidity of identity, a multiplicity of perspectives—in short, the presence of an uncertainty which offers the possibility for a creative response—is what will foster psychological wholeness and good health…”

This quote sums up beautifully what I currently think and feel about what the current Saturn/Neptune square is offering us, if we choose to work with it as honestly and creatively as possible. None of it, of course, is easy. Throughout the difficult two–week period just described, one of  Jung’s observations kept coming to mind: “There is no coming to consciousness without pain.”

Posted in Saturn and the Saturn Cycles (9 articles )

The mysterious, mystical planet Neptune turned direct two days ago, on Wednesday 18th November 2015, continuing its long, slow drift through its own sign of Pisces.

Since Neptune’s retrograde turn in June this year, I have been feeling a pull back towards some form of meditation practice: Neptune is still in my Sixth house, playing with the 9 Pisces Descendant, squaring Saturn in the Fourth house. I have been feeling a need to create more of a still centre for myself in the swirling, at times painful turbulence of our extended family life at this particular time.

I’ve always found Saturn/Neptune aspects especially difficult. Some of us are better than others at dancing on a wobbly board suspended over the long drop into chaos! However, as always when the great planetary archetypes combine, the level at which we engage with the combination through our individual birth charts always carries a challenge to become more self-aware, more constructive in our engagement with the areas of life highlighted.

I attended a few drop-in lunchtime meditation sessions at the Buddhist centre round the corner from my office – but found the balance between irritatingly cheerful homily and actual time to meditate not to my liking… then, the day after Neptune went direct, on an impulse I decided to sit in on a guided meditation session in our local Episcopal Cathedral, led really skilfully by a senior member of the clergy. We were given some wonderfully clear, inspiring and practical material to take away to help us follow-up this session in our own time.

I left after the hour feeling not only refreshed, but also inspired to continue – in a Saturn/Neptune, now I do it, now I don’t, manner. A key to managing Saturn/Neptune aspects creatively, is to make sure to stay reasonably on top of life’s necessary demands, but not to expect too much of one’s own capacity for self-motivation or self-discipline in other areas of life.  (I say this as a normally self-disciplined person) Giving in to the desire now and then to lie on the sofa with a good book and a long snooze is important during Saturn/Neptune times!

I went home that evening – to the sofa and the long snooze – and made a delightful discovery. My husband, whilst hunting for something else altogether, had found my missing angel! I am quite a rational, pragmatic person despite all those 12th House planets of mine. But I do like having an angel or two dotted about our home, and had become especially fond of a little bronze image which Ian had bought for me on a visit a couple of years ago to Buckfast Abbey in Devon, England. I called her Maria. She had lain contentedly on my bedside table until her mysterious disappearance some months ago – probably around the time that Neptune went retrograde.

What delightful Neptunian synchronicity! This morning I photographed angel Maria, to share with my readers. 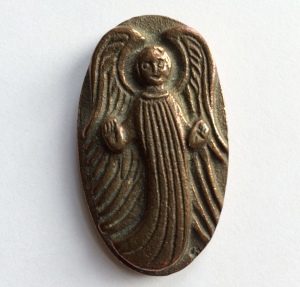 And there was more. My Facebook notifications this morning, via Friend June Haygood, invited me to Like a Page called Real Imaginal. This I did, intrigued by the most Neptunian-sounding title, thereby falling into the nebulous delights of Real Imaginal online magazine, “…dedicated to the re-enchantment of Neptune…” It is deep and insightful. Do check it out.

These are only SOME of my Neptune direct experiences this week.  I love it when planetary symbolism speaks so directly: even Neptune does that! What Neptune Direct experiences have you had this week? Do share – giving your feedback is a wonderful way to flesh out those living archetypes with the detail of people’s real lives.

Are you feeling the pull of Neptune Retrograde?

I’m feeling extremely Neptunian today, as Neptune settles into its retrograde phase. Very spacy – not like my usual fairly grounded self. It’s a good day for creative writing, and I have a new project into which to sink: the metaphor would have to be watery, wouldn’t it?!

The mystical planet Neptune turned retrograde at 7.5 degrees of its own sign of Pisces yesterday, 9th June at 14.00 GMT, not turning direct again until mid-November. This is a subtle, deep time for all inner, reflective, imaginative, spiritual work. Take up meditation, writing poetry, listening to music: pay more attention than you normally would, to the hidden currents of your inner world, and see what comes to you as the months pass.

In the meantime, here is a beautiful evening image of the sea, Neptune’s realm…

…if you have any feedback to leave, concerning how Neptune’s retrograde turning this week is affecting you or yours, I’d love to hear from you. I’ve just been inspired – once the piece of work this week stimulated by Neptune is done – to go back through my diary for the last three years to research whether  I had as strong a reaction on previous occasions.

Watch this space! I’ll be reporting back.